The U.S. Coast Guard has sounded the alarm over the potential for light-emitting diode (LED) lighting on vessels to compromise reception on VHF frequencies used for radiotelephone, Digital Selective Calling (DSC) and Automatic Identification System (AIS).

The distance at which the LED lighting starts to have an impact and whether the issue is limited to certain makes of lighting or navigation equipment, is unknown.

Due to their energy-saving capability and longer service life, LED lights are commonly used for navigation lighting, searchlights and floodlights, as well as interior and exterior lighting— including those used for visual effect.
The U.S. Coast Guard said that in one case, radio-frequency interference caused by LED lighting created a hazard that led to a serious safety incident.

‘The maritime rescue coordination centre in a United States port was unable to contact a ship that was involved in a traffic-separation-scheme incident by VHF radio. That ship also experienced very poor AIS reception.

‘Other ships have also experienced degradation of their VHF receivers (including AIS), caused by their LED navigation lights. LED lighting installed near VHF antennas has also been found to reduce reception.’

Strong radio interference from LED sources may not be immediately apparent to marine radio users, but there is a way to test for LED interference.

How to test for LED interference;

1. Turn off your LED light
2. Tune your VHF radio to a quiet channel, such as Channel 73
3. Adjust your VHF radio’s squelch control until the radio outputs audio noise
4. Re-adjust the squelch control until the audio noise is quiet—just slightly above the noise threshold
5. Turn your LED light back on
6. If the radio starts crackling when you turn on the LED lights, it is likely that the LED lights are affecting both your on-board VHF marine radio and AIS reception.

If you have experienced LED-lighting interference on your vessel, please report it to AMSA

Has this happened on your boat? Help us learn more, so we can address the issue.

Tell us:
• make and model of LED lighting
• radios effected
• distance from lighting to antennas and radios
affected;
and
• any other information that may help us to understand
the nature of the problem.
Send an email: reports@amsa.gov.au 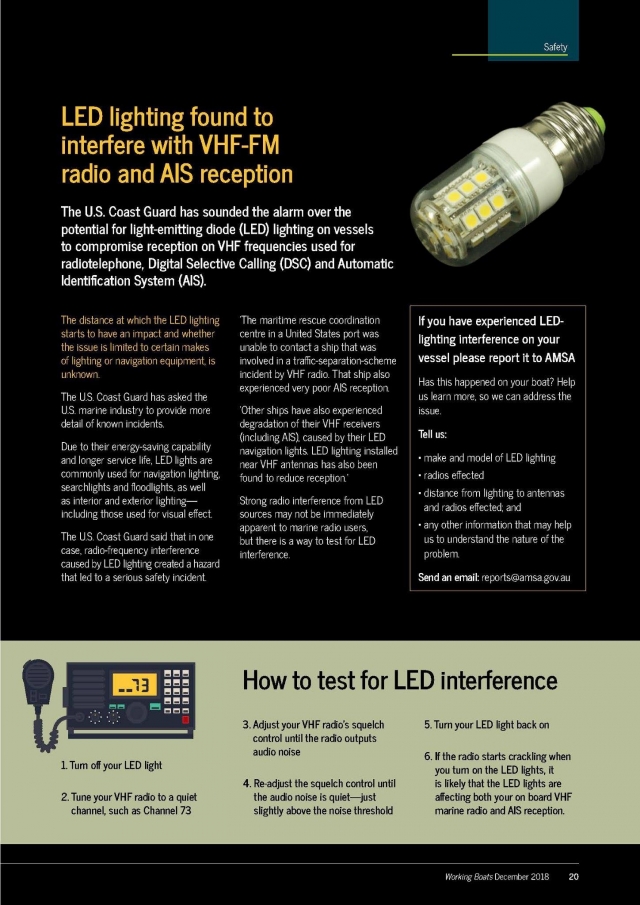