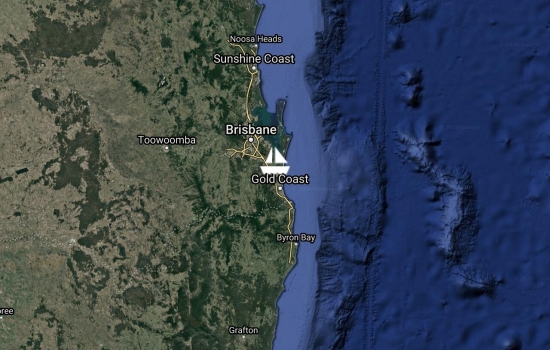 Anchored in the Coomera river outside Boatworks, fixing stuff.

Easy Tiger - Throwing the toys out of the cot.

<p><span style="font-size: 13.008000373840332px;">Today is Good Friday and a very, very good day it is indeed.&nbsp; Today we have thrown the lines off and departed the Boatworks dock to motor up to the Dux anchorage, where in a few days time we will meet up with several of the Down Under Go East Rally for this year and some of last years participants as well.</span></p>

<p>It was with quite a deal of apprehension that we let go of the marina berth, with Read more...

it&rsquo;s electricity, water and dry landing, the courtesy car, the assistance and the shops for any small forgotten item. I am not sure the day will feel the same without a regular trip to the hardware store.</p>

<p>In the last week, since our return from Cairns, Easy Tiger was lifted to the hardstand where she had a nice new coat of anti foul applied to the hulls, sails out of storage closet and hoisted and engines cleaned, serviced and started.</p>

<p>All seemed fine with Easy Tiger as she was lowered into the water for the first splash in 14 months. Then I said it. Yes, I said to Leanne that all seemed good. My apprehension that something had to go wrong with a boat that had been out of the water for so long, had started to fade.</p>

<p>We had been almost twelve hours in the marina berth getting everything sorted when Leanne decided to do a load of washing in our on board washing machine.</p>

<p>The load of washing even went ok, until it came time for the machine to drain the rinsing water. No go. Error 03 it said on the panel. My first thought was that the line might be blocked or something had dried inside the drain hose.</p>

<p>So dangling upside down into the area where the hot water system is, I managed to undo the drain hose for the washing machine. I could blow through it and suck water through it quite easily. Damn. It seemed like it wasn&rsquo;t an easy fix.</p>

<p>I drained the water out of the washer, spilling quite a bit into the floor of the boat. Now sloshing around in the washing water, I tried to get the machine to do another cycle and see if it had righted itself. No go. Again I had to drain the water manually, spilling even more on to the floor.</p>

<p>So, now it was time to ring the washing machine company. While I was doing this Leanne mopped up the spilt water and then put our de-humidifier into the spare cabin to dry things out.</p>

<p>To be fair the washing machine is probably two years old. The company said that they would send me a new drain pump for free which I was impressed with, but they would not pay for any labour involved in the repair, which I was not impressed with. The new pump arrived the next day, the day before Easter.</p>

<p>While this was being organized, Leanne noticed that the dehumidifier was turning itself off after only running for a few minutes.&nbsp; I had just packed all the manuals, receipts and information sheets away after searching for the washing machine book. Now there was another frantic search for the dehumidifier book and another Google search for trouble shooting the IONmax dehumidifier. A call to the dehumidifier company revealed pretty much the same as the washing machine. It&rsquo;s older than twelve months, therefore out of warranty. In fairness to the company, they are quite happy to have you send to Victoria, then charge you the technicians time followed by a charge to send it back. They were even happier to give a basic estimate of $350 for the repair of a $400 machine.</p>

<p>With the information we decided to throw the dehumidifier out and buy a new one. That will cost $389 delivered.</p>

<p>Meanwhile, back to the washing machine. With the new pump in hand I decided to tackle the job head on. Our washing machine is located in a very tight location under the bed in Easy Tiger&rsquo;s rear cabin. I had to take the door off and then lift the 80kilo machine up on to the bed to then roll sideways to then lift through the doorway to install it. It would take a herculean effort to get it out but that had to happen as the pump is located in the bottom of the machine.</p>

<p>I rigged some straps underneath the machine and positioned myself on the bed with my knees up around my chin. Leanne then squeezed herself into the doorway so that she could do the twisting once I had the weight of the machine. &nbsp;Surprisingly it slid out of its position quite easily and wedged itself between the cupboard and the door way. With several attempts accompanied by noises normally made by gold medal weightlifters, the machine came up onto the bed lying on its correct side for getting it through the narrow doorway. The problem now being that I was on the other side of the machine to the doorway with it resting on my lap.</p>

<p>With the twisting and wriggling that an Indian rubber man would have been proud of, &nbsp;I managed to writhe out from under the washing machine and then squeeze between it and the cabin roof to end up face down on the floor, sweaty, smelly and exhausted.</p>

<p>To my absolute delight the drain pump took less than tem minutes to replace with the new one, which meant that I had only a short recovery time before again I was wrestling with the machine to reinstall it into the professionally crafted and exact fitting space we had paid to create for it. Again I lay on the floor pushing at the bottom while Leanne stood above me pushing at the top. After an hour or so of grunting, pushing, and levering we had it right.</p>

<p>Convinced that it was ready to go, I plugged it in and turned the dial to the shortest cycle. The machine burst into life, filled its bowl with water and washed for the next 5 minutes while we watched with baited breath.</p>

<p>Then we heard a whirr and a clunk. We heard water being pumped over board. We high fived each other in glee, thinking the problem solved. Or so we thought. The machine had always drained the wash water and that was what it was doing now. We sat back down. We waited with trepidation. These machines seem to take an eternity to get through their cycle when you are sitting there waiting for them. At last with a click and a whirr, the moment had arrived. Drain. We waited. Come on, drain. Please &hellip;drain. Alas it was not to be. Even with a new pump and a cleared drain hose the washing machine would not drain. Cheekily it just displayed Error 3 on it&rsquo;s red display screen. It just sits there daring you to drain it manually, to spill water all over the floor and to use the dud dehumidifier to try and dry it all up.&nbsp; But it was late Thursday night, so nothing else we could do but cut the power and kill that annoying red error code. Now facing the fact that being a problem in the electronics and out of warranty, the washing machine may well be the next thing to be thrown over board.</p>

<p>But now it&rsquo;s Good Friday, we have motored up to Dux anchorage and the washing machine and dehumidifier experience is temporarily forgotten, while we enjoy a sundowner with other boaties.</p>

<p>We have all Easter to relax before we ring the company. Fortunately, it&rsquo;s only the toys that need to be thrown out of the cot, not anything critical to Easy Tiger&rsquo;s sailing adventures.</p>

Easy Tiger is a 40 ft Fusion Catamaran and we are participating in the Down Under Go East Rally this May.