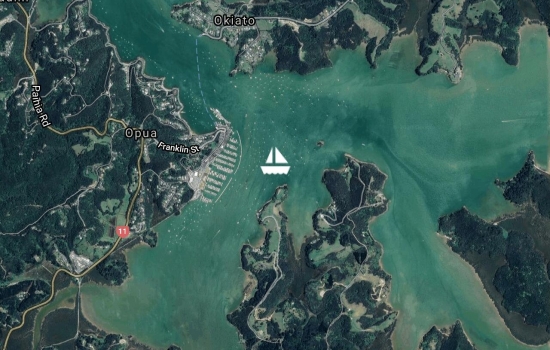 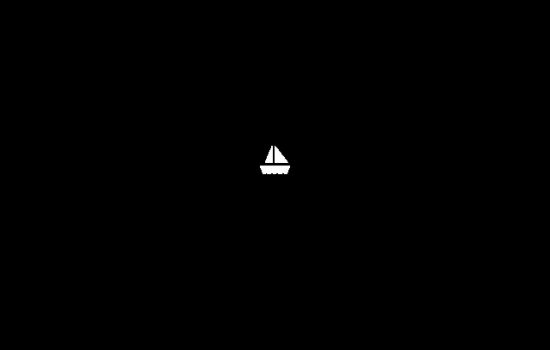 We've been making great progress through the "Goldilocks zone" where it's not too hot, not too cold, nice and sunny with just the right amount of wind. Just 4 days ago it was uncomfortably hot. It gets about 2 degrees cooler each day as we sail South. Apparently winter has properly arrived in NZ! From here onwards it is getting decidedly chilly and there will be mostly too little wind from the wing direction. A lot of motoring to be done after we lose the wind but we are only a few days away and we still have plenty of fuel. Opua cruising club is reportedly open (yay!). We are very much looking forward to a beer and a long sleep!

All going very well and making good progress. Chris has a great signal when reporting to Northland radio on 12Mhz and when he talked to me on 8 MHz he came through clearly too. They are making great progress and although there is the option of stopping at Minerva they have the bit between the teeth and will likely head straight for the barn. Patricia GHRadio 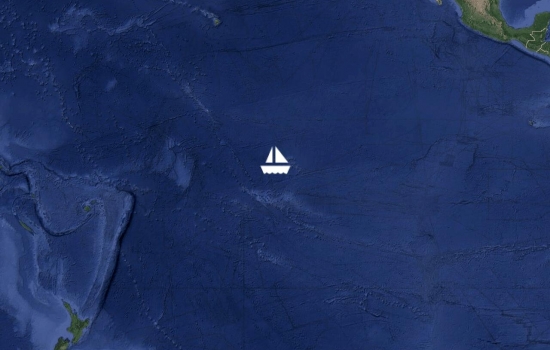 After two great weeks in Nuku Hiva we are on the move again! Life in Nuku Hiva has returned to normal, there's no lockdown so we were able to do some good long walks, build sand castles, buy expensive food, enjoy fresh pamplemousse and even party with the other boats! Now back to easy trade winds sailing under clear blue skies. French warship inspected us today, seemed happy with our credentials. 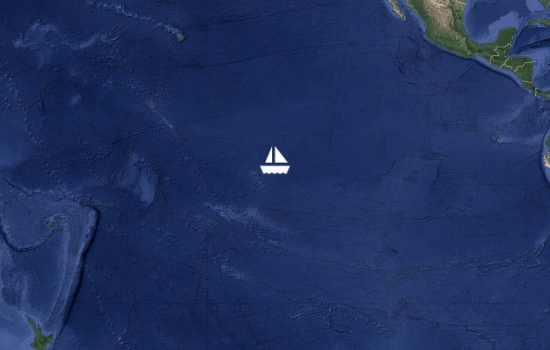 Great sailing conditions continue. The last couple of days have been a giant slalom between huge drift nets 30 miles long, marked by dozens of AIS buoys. We just entered French Polynesian waters so hopefully there will be no more of those. Our ETA at Nuku Hiva is daytime on the 8th (local time). We are really looking forward to getting off the boat for the first time in a very long time! Sent from Iridium Mail & Web. 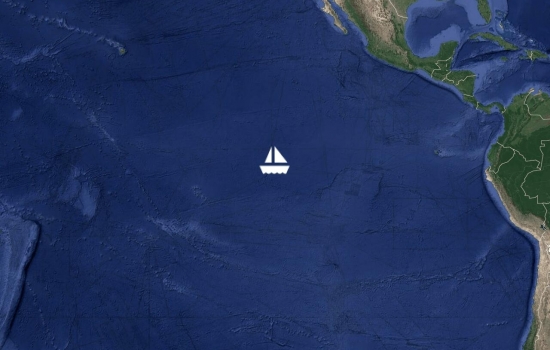 Sorry for the lack of updates, every day is the same out here! Mostly nice sunny weather with the occasional rain squalls once every day or two to wake us up. We are taking our time, sailing for comfort not speed. Satphone email is working normally again at last after two weeks of technical problems at iridium. Meanwhile we are now in range of the PacMagNet SSB radio net so we are less reliant on the satphone and it's nice to chat to other boats in Polynesia and the South Pacific. We are not alone out here after all! Less than 1000nm to Nuku Hiva now and we have been granted permission to stop there. Looking forward to stepping on land for the first time in nearly 2 months!

After motoring through the lee of the Galapagos islands this morning we have now picked up gentle trade winds and making good speed under sail at last. Fine weather and comfortable seas. Everyone enjoying the ride today! We've had better wind and used less fuel than expected, plenty of fuel in reserve and we should have a good wind all the way to the Marquesas now. Tonight we cross the equator! 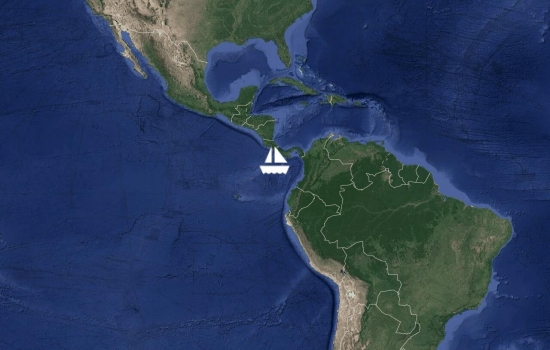 Just a reminder: please do not worry if you don't see any updates here on YIT. There's no guarantee that the satellite phone will work, it could easily have a fault or get broken. We often have it turned off anyway for various reasons. Position updates here should be considered a bonus, not an essential! If updates on here stop then nothing is wrong, you'll hear from us in about 4 weeks when we reach French Polynesia (if we can stop there) or otherwise in about 7 weeks from NZ. Perhaps much longer if something slows us down. For example barnacles on the bottom could slow us down a lot! No need to worry for 12 weeks, if we had a problem we'd use an EPIRB.

Cool Ohana, she made it thru

Cool Ohana, she made it thru the Canal. A big deal in this environment. Isles de las Perlas are just north and cool to chillax before the big voyage. Best wishes from NZ. /jim 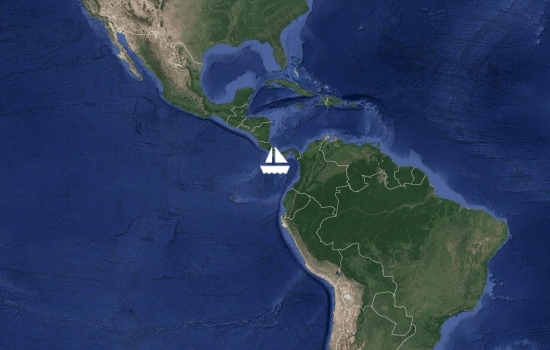 We had a couple of days of heavy rain showers with many wind shifts to follow. Hard work but we managed to make good progress to the South and we have been motoring SW in clear, completely calm weather for a few hours now. Bob McDavitt has updated our weather routing and we should soon find stable, light southerly winds which are the edge of the trade winds, then we will be South of the disturbed ITCZ area and can relax a bit. All's well. 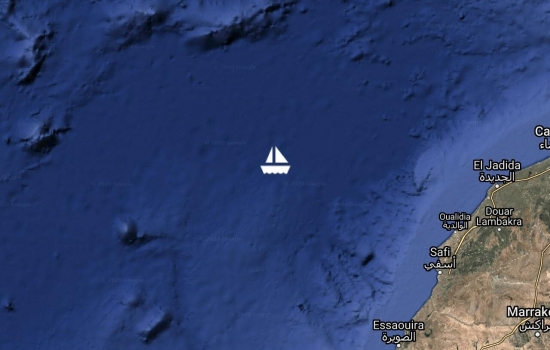 After a very stressful few weeks wondering how long we'd be stuck on the Atlantic side, we were in the first set of three boats to go through the Panama canal since the lockdown. All went smoothly and we departed Panama City at 1400 yesterday. We are now gently sailing South at three knots in flat seas, with a very light breeze behind us. A nice relaxed start and we are quite happy to be fully self isolated out here! Happy Easter to everyone ashore. 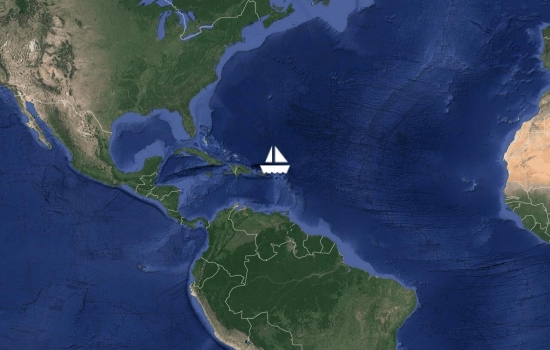 Departed Marigot 6pm today, heading for Panama canal. Greg has joined us as crew today and is doing a great job. Occasional showers, making 5kn average due west. Taking it easy for now with just the jib, will add more sail in the morning. All's well on board.

Some photos from our first couple of days in rapa...

Ohana - Photos from the voyage to rapa

We're struggling to get usable Internet here but this is an attempt to upload some photos of my birthday cake and the pay we made for the engine on the way to rapa. Photos of rapa coming soon if this works!

My awesome birthday cake, baked by Nico at sea on the way to rapa

The new oil pickup pipe we made on passage, getting it into the bowels if the engine wasnt easy!

We were warmly welcomed by the villagers at Olal who have built a brand new yacht club and bar there and organise the annual Rom dances and Back to my roots festival. Unfortunately yachts never visit there and anchor an hour&#39;s walk away just because Olal is not in any of the cruising guides or pilot books. We decided to fix that and carried out a survey of the anchorage which we will submit to all the vanuatu cruising guides... here it is so you can be one of the first yachts to visit!

Neighbouring Nopul is a good anchorage (Much better than Ranon) but it
means a very long walk to Olal including crossing a ford which can be impassable
after heavy rain. We spent 3 nights there before moving to Olal to do
the survey.

Olal has the new yacht club and bar and is where chief Sekur lives.
The Rom dances and two annual festivals are held about ten minutes
walk inland and everyone comes back to the yacht club afterwards.
While we were there the BBC were filming a documentary primarily about
the volcano but also featuring the dancing at Olal. The
villagers there are doing good things to raise money for the school,
keep their traditions alive and put on wonderful events where the
dances are very real, not just put on for tourists and they are making
a real effort to attract yachts. Chief sekur has travelled widely as a
cultural ambassador for Vanuatu. He can organise dances, pig feasts
and open the bar any time, all night on occasion! The chief at Nopul
was also very friendly but there is not much to do there.

I would say Nopul is the better anchorage in trade winds mainly
because it is bigger but on windy days you can get random gusts and
swing about there. In Olal the wind is less gusty and there is a
steady breeze which is better for ventilation and power generation,
not much swinging. The reef offers good shelter from all sides except
from the north. We had winds from due east and although the waves can
wrap around the end of the reef a bit our anchor location still had
very good shelter. It could be a little rolly right at the top of the
tide for a monohull but otherwise very calm.

The depth soundings were calibrated roughly to spring low tide.
The least depth I saw on the sounder as we swung at anchor was 1.9
metres and deeper water was available nearer to the entrance.

Waves were not a problem in the entrance at all in the conditions we
had but they did come over the reef towards the dinghy channel a bit
at dead high tide.

Locals reported that a major tsunami or storm surge a few years ago
had drastically altered the anchorage, destroying the wharf and
reducing the depth by several metres. silting up may be continuing and
the sands may still be shifting. Locals who came aboard were surprised
when they saw our depth sounder, expecting a lot more water (a small
cruise ship used to visit Olal until the wharf was destroyed).

We had only about 15m of chain out, there would be room for maybe 2-3
big yachts in there on short scope if they are not too deep drafted, plus a
couple more cats if they have daggerboards.

Holding seemed very good but avoid the rubble near the reef, there
were a few larger boulders there which could snag an anchor.

A new airstrip is under construction at Olal near the school, nearing completion
now. I got the impression Olal hope to become the main transport hub as well
as already being the main cultural centre of Ambrym.

As the waves push water in over the reef the current appeared to always flow
towards and out of the entrance and can be strong between the inner pair of stakes
and in the small boat channels both sides of the harbour, especially in the first half
of a falling tide. this current probably helps reduce swinging but might make it
unsafe to swim.

To download the chart - click on the image of it at the top left of this blog. A bigger but still squashed version will appear. Right click on that and select "save image as..." or the equivalent option in your web browser to save the full size image.

Beachcomber island is welcoming to yachts and has moorings available. Free mooring with $10/person landing fee. It's a backpacker resort on a tiny island. (Etai island according to the charts)

50ft cruising catamaran, on our way back to NZ from Europe